The Fallen Kind Vol I: Ghosts Of Nunchi by M. Almelk 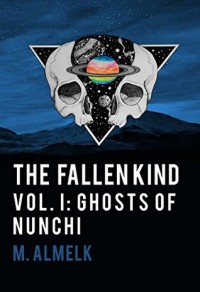 The Fallen Kind Vol I: Ghosts Of Nunchi by M. Almelk
My rating: 2 of 5 stars

The planet has suffered since humanity arrived, and war has run rampant. After an event of near mass extinction, the survivors struggle to do their best in the grim conditions that have befallen them. It's not over yet, however, as a certain individual plans for a world-wide cleansing. He'll stop at nothing to protect the "Promised Land" from the conflict that so closely follows humankind. What he doesn't foresee, are the actions of a select few, and how they threaten everything he's working toward.

I received this book in exchange for an honest review. My thanks to M. Almelk for giving me the opportunity!

I feel I need to be clear right from the beginning - I didn't consider this to be a bad debut novel. In fact, I believe there to be good, solid ideas here that verge on being original. There's been an abundance of post-apocalyptic titles saturating the market lately, and whilst there's nothing at all wrong with that, I admittedly find it difficult to differentiate them all from each other. It's nice to find one that starts off in a new direction, with something that so obviously sets it apart. The planet of Casi immediately piqued my interest and I couldn't help but acknowledge the creativity involved - Almelk included geographical details and information regarding its wildlife that, quite frankly, impressed me. In particular, the way in which animals were presented was a personal highlight; Emba the cat, the Oroculyx spiders - I found enjoyment in their scenes, especially when they displayed their uncanny intelligence.

Despite those positive elements, however, it's unfortunate that from early on, I just couldn't connect to the characters or feel all that invested in the plot. Evan, Beveridge and Reya, whilst decent and likeable enough, remained at a distance as the story constantly jumped around. There were mere glimpses of the friendship and romance between them, and rather than witness their connection first-hand, I was told of it. For instance, Evan and Reya had very little interaction on-page before I was told of their feelings for one another. Even if they had history, and even if their partnership was fated, I always need more substance to feel any semblance of emotion for any romance.

That brings me to my biggest issue - the telling rather than showing. There are certain things that are automatically detrimental to my appreciation of a book, and this is one of them. I much prefer when I can glean the feelings and intentions of a character without them being outright explained to me through the author's narration. Dialogue's an important and essential tool for this, but it wasn't used here, not to its fullest potential. I would've much preferred had there been more quality time with the characters that mattered, with the inclusion of discernible development, instead of trying to fit in a confusing amount of people and relationships. I lost track of everyone that was named in the Nodding Hamlet, and wondered why the story often got side-tracked delving into the history of someone that didn't seem to play a critical role. Of course, switching between multiple perspectives can be done well, but in this instance, it didn't work for me and only caused a great deal of confusion.

If I had to pick a favourite character, excluding the non-human entities, it would be Beveridge, or perhaps even Law. The former gave the impression that he wasn't a normal human being, whilst the latter didn't strike me as a traditional bad guy. I agreed, to an extent, with his belief about humanity - as a species, we truly are destructive. Just think of the damage we'd do if we decided to settle upon another planet that already had an established ecosystem. Not worth thinking about, really! I would've probably liked to see more of Law's magic, or whatever he did to raise people from the dead.

In conclusion: In truth, I believe this is just a case of "this wasn't for me". I didn't hate it, but I couldn't love it either. My complaints lie with how it was written; a large amount of telling, as well as continually leaping around and not giving the main characters enough attention.

Emba swished his tail a little in amusement. He truly enjoyed listening to spoken language. Of course, he didn't offer a response. Perhaps he was unable to. Perhaps it was more fun not to. How curious it was that Evan and his kind had developed complex languages for communication, yet they couldn't communicate properly with each other. Their history was littered with conflict, war and atrocity. Some might say that language simply constructed a bigger platform upon which this species displayed its hidden, unshakeable faults.