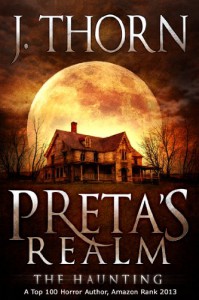 Preta's Realm: The Haunting by J. Thorn
My rating: 2 of 5 stars

When certain people in his life start disappearing, Drew Green struggles to keep his mind and family intact. Something whispers to him at night; a voice of a person no longer living. It tells him of a time long past, and a curse set to haunt the bloodline. As events eventually spin out of control, Drew finds himself at the mercy of a creature that should only reside within nightmares.

After about a year or more of having this on my kindle and eventually forgetting about its existence, it finally caught my eye once again. What followed was a last minute read of the month - it's a short book, which I was later thankful for. Initially I didn't know what to expect, but the words akin to "disgusting" and the likes on other reviews piqued my interest. Just how bad could it be? At this point I'd say I'm pretty used to the extreme use of gore and other similar themes, so my curiosity got the better of me. My concluding opinion is that whilst involving some nasty and sensitive elements, it was largely poor in regards to story. I found myself confused most of the time, not only questioning certain plot decisions, but also of how it was paced. A scene would suddenly jump in time without it being properly conveyed, yet I'm not sure if that was supposed to be intentional or not. Either way, it came across as not entirely thought out - like Thorn rushed through the process.

I can't say I particularly liked any of the characters, nor did I understand their actions. I found Drew to be dislikeable as a person; how he treated his family was a large part of that. It was hinted throughout that he suffered from something in the past, perhaps some form of mental illness, yet it was never explained, and thus I settled into a state of aforementioned confusion whilst trying to garner what I could of the backstory. I know Ravna was a decent man in the grand scheme of things, but I didn't get a good first impression of him and unfortunately that stuck. His introduction consisted of him fantasising about a younger waitress, which I honestly found to be offputting. He referred to her as his "gothic princess", and the moment he noticed her in a colour other than black, the fantasy was apparently ruined. Clearly this information wasn't relevant in any way, shape, or form, yet it was still relayed like it was somehow crucial. The others? I don't have much to say about them, other than they lacked memorable presence.

"Preta" and "Gaki" essentially mean the same thing - "hungry ghost" - and is a supernatural being present in Hinduism, Buddhism, Taoism, Chinese and Vietnamese folk religion. I can't say I was familiar with the lore of this creature until I did some homework. It's a good concept - I always like when authors include their on take on weird and wonderful monsters. I did find some discomfort in Thorn's representation, but I was simply too distracted by other elements to really appreciate the depravity. The accounts of the past, told through the spirit of Drew's grandfather, honestly bored me enough that I wanted to skim over; the narrative was written in such a way that didn't pull me in, or make me care for what was happening.

If I were to detail how this could've been a better read for me, then it would go like this; the focus solely upon Drew or Ravna, with either one being fleshed out instead of the back and forth. Drew was supposed to be a devoted family man, yet I didn't see that. Ravna was supposed to be some sort of hunter, yet I felt I was merely given a brief glimpse. Of course, this is my personal opinion; plenty of others thoroughly enjoyed it as it is.

In conclusion: I originally rated this three stars, however I've retracted one to better fit my thoughts. It was a definite miss for me - I didn't like much about it other than the somewhat disturbing scenes of "Gaki".

"The 'cesspool' you mention is humanity itself. The 'gateway' is the greed, lust and insatiable suffering of humankind. You can no more rid the universe of Gaki than you can of air or water."