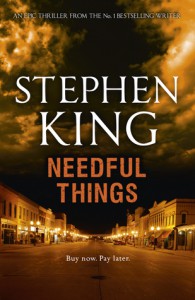 Needful Things by Stephen King
My rating: 4 of 5 stars

There's a new store opening in Castle Rock, and the whole town has noticed its special green awning. Questions arise as to what it will sell, and whom exactly the proprietor is, but nobody ever expected the severity in discovering such simple things. Treasures that appear otherworldly in their perfection start to become prized possessions, soon enough causing disarray in the town's day to day activity. There's something too good to be true about Needful Things.

Whilst it felt like this one took me far too long to finish, I really shouldn't forget that at nearly a thousand pages, it's one of the longest books I've picked up in years. Being a relatively slow reader in general, the weeks seemed to fly by as I continued to be in thrall of Leland Gaunt's brilliantly wicked schemes, thus it was approximately one month before I reached the end. I admit, such lengthy novels can be intimidating to me, whereupon I feel I'm not making much progress, but I found myself very much intrigued by King's use of development; rather than everything happening all at once, a considerable amount of time was taken to form an almost intimate relationship between character and reader. I do admit that despite this intention and my enjoyment for the majority of the time, my interest dropped now and again by a slight margin with all the backstory and slow trudge toward climax. There was just so much, and sometimes I had to place the book down and have a break.

I feel like in the past, I dismissed King's work as I considered it largely not my style, however, after several years of my tastes morphing and expanding, I believe I can finally appreciate his format of storytelling. He has a very precise way of writing, and it truthfully jarred me at first, but it really does work within the setting he creates. Of course, this is strictly a personal matter, but one I wanted to briefly touch upon.

The plot of this beast of a book deals a lot with obsession and greed over material objects - something we have all experienced in our lives. Materialism in general is a huge part of humanity, and Leland Gaunt was able to immensely exploit and amplify the deepest desire of each victim, going so far as to greatly influence their every paranoid little thought. He was a truly an excellent villain; one of the best as far as I'm concerned. He implemented himself into people's lives, and quickly became integral; as far as they were aware, he took their best interests at heart. It was his expertly woven manipulation, as well as his cool demeanour, that struck me as quite fascinating. Whether he was a demon, a dragon, or the devil himself, I won't soon forget how much he impressed me.

At times I found myself confused over the abundant cast of characters, but soon enough they all had their own particular and memorable differences. The two that drew me in the most, gaining my favouritism and attachment, was Polly and Alan. They were both painfully realistic in their emotional and physical ailments. I wished time and time again for them to survive the horrific events Gaunt set in motion, and most of all, for them to remain together. With so many diverse personalities, I experienced a range of reactions, from laughter to pity and much of everything in-between. You see, there's definite comedic value with such a man as Buster, and a sense of tragedy with someone like Brian - all in all King was able to bring their unique situations to life.

In conclusion - I'm glad I plucked up the courage to read this. I'd describe it as a slow burn, leading to an explosive finale. The evil mastermind behind the whole thing, Leland Gaunt, had to be the highlight; at first subtle in his transgressions, but then going all out on the poor citizens of Castle Rock.

The two women lay draped over each other like lovers, their blood painting the cinnamon-colored leaves in the gutter.