Wild Blood by Nancy A. Collins 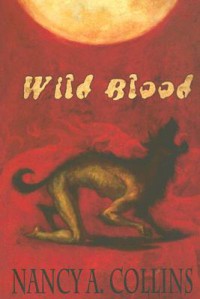 Wild Blood by Nancy A. Collins
My rating: 2 of 5 stars

When tragedy befalls Skinner Cade, he sets out to discover his origins - just who was his biological parents? Unable to keep his temper in check, his search soon takes a detour as he lands himself in prison, where an incident results in an all-out bloodbath. A monster resides within Skinner, one he's unsure how to handle, and when he's introduced to the world of the vargr, he's not even sure he wants to learn of his ancestry.

This was an impulsive buy at the local secondhand bookstore, as first and foremost, the cover caught my eye. It seemed almost comedic, so I was under the impression it would include some sort of black humour. I was wrong, however, and was confronted with over the top depictions of rape and incest that were heavily integrated into the plot itself. Don’t get me wrong, I love werewolves; the more brutal the better, but this was the first time where such disturbingly sexualised topics dominated the pages. It became apparent that important story elements were sacrificed in order to rush the plot along, and focus primarily on graphic content. I should also mention that I don’t have any issues with graphic content concerning sex, however if I feel such matters damage the overall story, then that’s where my problems lie. Despite being a short book, a lot actually happens; there’s before, during and after prison, as well as the rut melee with a lot in between. There certainly were interesting characters and predicaments that Skinner got himself into, but they were so underdeveloped that I just couldn’t get a proper sense of them.

Let’s start with the prison and Skinner’s relationship with Cheater. There appeared to be a connection between them, or something I couldn’t quite grasp. Cheater’s dream and use of the term “Prince” was certainly interesting, but it was so ridiculously vague. I also felt that the friendship in itself was bewildering, as Skinner, of whom was supposed to be a “good guy”, was perfectly fine with his companion stealing and murdering. If this had of been fleshed out, with time given to properly establish them both, then it just might have made sense. This goes for the later half of the book as well, where things rapidly progressed until Skinner was suddenly of great importance.

I actually liked Skinner to an extent, and I enjoyed that his life took a radical turn into the world of claws and teeth, but I couldn’t attach myself nor particularly care what came of him when his development left a lot to be desired. As a person, Skinner often fluctuated between being decent and being rather questionable, with what actually drove his actions leaving nothing but confusion. I think the intention was for him to be the unexpected hero; the good man thrown into the fray and always coming out on top - which I, ultimately, didn't care for. Don't even get me started on the last minute romance attempt, because it was positively absurd.

The shock factor loses its value if overexposed, at least in my case. Sure, the first rape scene (of a dog, I might add), was very much unpleasant, but each taboo subject thereafter only numbed me further. By the end, I wasn't even remotely surprised by what transpired. It was, without a doubt, very curious that Collins decided to go down the route she did - painting the species of "vargr" in a very ugly light, moreso than the usual bloodthirsty monsters of the genre. As it was, I had a hope that the entire race would perish.

In conclusion - I've changed my initial rating to accurately reflect my thoughts, from three stars to only two. It was overly rushed to appropriately develop the plot and characters, instead relying upon disturbing content to carry it through. A shame, as the concept itself was intriguing.

"The vargr are all belly and eyes. They desire all that they see. And that which they can not have - they destroy. Completely and utterly."